Difference between revisions of "List of examples of convergent evolution"

note: this is a stub based on the wikipedia page

Convergent Evolution is evidence or argument for physical attractors in the phase space of dynamical possibility which guide and constrain contingently adaptive evolutionary processes into statistically predictable future-specific structure or function, in certain complexity-dependent classes of physical environments. When seen from the perspective of the dynamics of evolving species, this process has been called convergent evolution. The evolutionary dynamics of several species morphology or function is seen to converge to particular archetypal forms, in a variety of environments. Convergent evolution can be seen in the example of homology, which in 1843 Richard Owen defined as "the same organ in different animals under every variety of form and function". A famous example is camera eyes, which appear to have evolved on Earth from different genetic lineages to look and work very similarly in vertebrates, invertebrates, and other species. One can easily see the argument that, in universes of our type, such eyes, first created by a process of evolutionary contingency, once they exist, appear to become developmental necessity. Proving this argument with evidence and theory is of course more difficult.

Such attractors have been called deep structure, guiding evolutionary process in predictable ways, regardless of local environmental differences. Like biological development, which depends on specific initial conditions (developmental genes) and persistent environmental constancies (physical and chemical laws), convergent evolution, if it exists, could be characterized as environmental development, and ultimately universal development, as it would depend on specific persistent constraints and environmental constancies, beginning with certain universal initial conditions, physical parameters, and physical laws. If the universe itself is a replicative system in the multiverse, as some cosmologists have proposed, such special initial conditions and constancies may have themselves self-organized in an iterative process, just as biological developmental parameters have self organized, in biological systems over multiple replications. For more on the latter idea, see our wiki page cosmological natural selection (fecund universes).

Convergent evolution—the evolution of similar traits in unrelated lineages—is rife in nature, as illustrated by the examples below. The ultimate cause of convergence is usually a similar evolutionary biome, as similar environments will select for similar traits in any species occupying the same ecological niche, even if those species are only distantly related. In the case of cryptic species, it can create species which are only discernable by analysing their genetics. 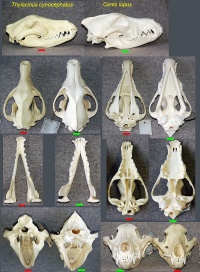 The skulls of the Thylacine (left) and the Grey Wolf, Canis lupus, are almost identical, although the species are only very distantly related (different infraclasses). The skull shape of the Red Fox, Vulpes vulpes, is even closer to that of the Thylacine.[1] 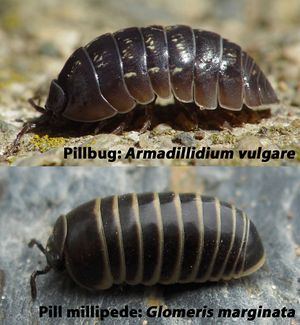 Pill bugs look like pill millipedes, but are actually wood lice that have converged on the same defenses, until they are difficult to tell apart

Proteins including enzymes and biochemical pathways